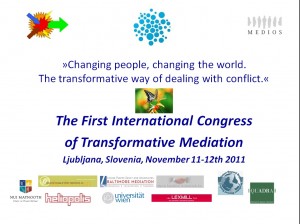 The Congress, which was intended to support the development of mediation, harmonization of the transformative mediation in the Slovenian territory and the methods of alternative dispute resolution, was held in the beautiful atmosphere of Hotel Lev (5*) in the centre Ljubljana.

The Congress was held in English and Slovene language. Interpretation was provided for the plenary part of the Congress.